Lab alumna Prof. Pamela Abshire in the department of Electrical and Computer Engineering at University of Maryland is elected an IEEE Fellow. Congrats!

Lab alumna Prof. Jennifer Blain is promoted to the rank of Associate Professor with Tenure in the department of Electrical and Computer Engineering at Arizona State University. Congrats!

Our paper titled: Real-Time Sensory Information Processing Using the TrueNorth Neurosynaptic System, has been accepted for Lecture presentation at Late Breaking News of the 2016 IEEE International Symposium on Circuits & Systems to be held in Montreal, Canada from May 22-26, 2016.

Graduate student Kate Fischl receives a 2016 National Science Foundation Graduate Research Fellowship Award Congrats! Her research is at the intersection of the life sciences and electrical engineering, with a focus on social neuroscience and neuro-technology. She seeks to understand and model emotion and collective social behavior, as well as embody such knowledge into engineering devices such as robots.

Jonah Sengupta joins the group in the Fall of 2016.

Lab alumna Prof. Alyssa Apsel is promoted to the rank of Professor in the department of Electrical and Computer Engineering at Cornell. Congrats!

More News
Who are we?

Welcome to the website for Prof. Andreou Lab at Johns Hopkins University. The Lab is co-directed by Prof. Andreas G. Andreou and Prof. Philippe Pouliquen. The research in our lab comprises of projects with intertwined science, engineering and technology objectives.

From a science perspective our research aims at developing a theory of computation that incorporates constraints imposed by the structures that underly processing, communication and memory. Furthermore we seek to understand how one can do parallel processing effectively and efficiently under the fundamental limitations of delay and energy. While understanding the physical and abstract computational structures of brains is our ultimate endeavor, we are natually deeply involved with the challenges of computing in the era beyond Moore's law. Research in sensory communication is aimed at gaining further understanding of the basic underlying processes in vision and audition as well as the sensory motor integration loops.

From an engineering perspective, biological systems serve as working models of microsystems for sensory information processing and memory as they have been optimized over millions of years of evolution and provide key insights on algorithms, signal representation and architectures.  By innnovative use of CMOS state of the technologies, including 3D, mixed signal circuit design techniques and by careful interpreting the organizing principles in neural systems, we are making progress engineering microsystems in the two broad areas of information acquisition/transduction, and knowledge representation/memory and learning.

"50 years from now, a century would have passed from the invention of the first microchip and Moore’s law will be no more. However we will be living in an era where the ‘chip’ – short for the microchip – in its different forms from imagers to ion sequencers to labs-on-chip and cognitive processor units (CogPUs) will provide the underpinnings and the foundation for affordable, state-of-the-art, global personalised medicine and healthcare delivery."

Please read more in " Johns Hopkins on a Chip: microsystems and cognitive machines for sustainable, affordable, personalised medicine and healthcare". We are gratefull and thank our sponsors that provide funding for our research: DARPA, NSF, NIH, ONR, AFRL, JHU-APL. If you think what we do is worthwhile and want to support it, please do here or by contacting Rising to the Challenge!
Photo Gallery

It has been officially declated that Tom can be called Dr. Thomas Murray (Spring 2015). And yes, the white boards in our lab are on the slanted ceiling walls. 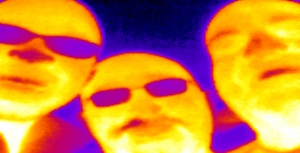 Having fun with our new IR camera! Can you guess who is in the picture? (Fall 2015)